A few words with Daniel

Hello Daniel, can you tell us what made you end up working in the music industry?

Growing up in a small town in Poland, behind the Iron Curtain in the 70s and 80s, deprived me of all the quality music stores around. All music industry news came either from smuggled music catalogues or a rich family member telling you fables about imaginary music places full of gear at the end of the rainbow, in West Germany. At that time my dad had this friend, who was a great drummer by the way, that was traveling back and forth to Germany sneaking in some pieces of industry news and introduced the Juno 106 to me, which was the first synth I ever put my hands on. Listening to it was like finding a missing and final piece of a jigsaw puzzle, although I was only like 12 at the time. My love for synths partly came as well from my love for 12 black-and-white keys. That was inevitable when you come from a family where your mother is a piano teacher and you spend days with her in the music school killing your time in an empty piano classroom. I am a violinist, but those skills are getting a bit rusty.

Sure, I got a bunch of vinyls and tapes with of all those fantastic artists and their synthesizer names stated, yet all I was actually doing was joining the dots without any real background of technological knowledge or hands-on experience. I realized that while being a huge fan of Jean-Michelle Jarre, Tangerine Dream and our local Marek Bilinski, I wondered more about the “How?” rather than the “What?” was coming out of the speakers.

Much later with the help of a music magazine like “Estrada i Studio” and the undisputed blessing of the Internet, I finally got to discover the world of synthesizers, the synthesis, production techniques and MIDI in its depth. Catching up with what my gloomy early days were unable to provide I finally had to turn to a pro (Piotr Migatulski of Edo Studio) to learn about studio mastering. Synths have always been my passion and I knew I had to work with them and FOR them, if you will.

My luck came with contacting the right producer at the right time. Whether you believe it or not, it was AAS with their initial trust, which I am so grateful for, that put me on the map. Starlight in 2010 was my first sound pack for AAS Ultra Analog. This first commercial success of mine somehow proved that this was the right job for me. Although the music industry is not the easiest one to survive in, to say the least, the unexplained persistence that I possess still allows me to hang in there, though I keep telling myself that it is actually the skills, experience and “the gut feeling”, not only my persistence.

What led you to become a freelance sound designer?

Before my sound designing period I had this idea to contact software instrument developers and offering them my composer skills for audio demos in exchange for a copy of the synth. I simply composed the piece using the instruments’ presets. The track was supposed to then be placed online with my name alongside for obvious publicity reasons. The idea got real, the devs were satisfied, and I was over the moon. With time, the trust put into a guy from nowhere like myself, amassed quite an impressive collection of soft instruments, and hands-on knowledge. That’s when I gained awareness for the market’s needs as well as my obvious personal thirst for more.

And it was George Reales of DiscoDSP, who I did an audio demo for on Discovery Pro, who accepted the idea of designing my first set. The set was a Christmas gift for all the registered users, as far as I remember. There were no bad comments when released so I presume it was nicely received. Then I designed my first commercial soundpack–Caffeine for Discovery Pro–still available on my site. Not a milestone in the music industry, yet quite a milestone for me. At that time it was a sign that I could be independent, create sounds and inspire others. A fantastic feeling. I just wished I could have designed presets for hardware synths. Well, you can’t have everything, can you?

What are some important projects in your career you feel have helped you grow as a sound designer, composer, or producer?

Every single project I have done has been significant in some way. However, the ongoing experience with the AAS instruments has been developing me as a designer (over 10 packs done and I have not yet said my final word). Starlight for AAS Ultra Analog was a commercial breakthrough, but I guess the Digital Sins sound pack for AAS Chromaphone 3 was the first pack when I realized which direction I was actually taking. I knew the final result had to be quite surprising, pushing back the barriers of the instrument’s architecture and offering unexpected synth sounds in this case. The other one is the Insomnia sound pack for AAS Lounge Lizard EP-4, that I am pretty sure blew away some users’ minds as well.

Of course there is Falcon by UVI that I was lucky enough to design factory presets for. All possible synthesis under one roof as well as endless possibilities turned out to be a fantastic study to master my sound designing skills.

Tell us what part does sound design occupy in your composer/producer work?

Pretty much the majority of it I presume. Designing presets is the first step to take before composing an audio demo and mix it and showcase the instrument’s possibilities. This is what I do and focus on. I am obliged to stick to the instrument’s environment, no additional post-effects, to keep the presets in the audio demos as original as possible. And even at the level of eventual audio mixing, I often return to the synth to do some adjustments afterward.

I avoid calling myself “a producer” per se without further explanation as to what I actually do. I would prefer calling myself “a craftsman”. I craft sounds, build sound packs, compose and yes, produce audio demos eventually, however I’d still like to call it “a creation”.

How do you approach the creation of sound banks? Tell us about your process.

A lot of coffee first and then… another espresso. Keep in mind that sound design is not my main occupation. Like an average vampire I sleep during the day, meaning I run a language school for the living. Seriously! I wake up at night to sit in my studio and keep up with my dreams. I was blessed with the most understanding and supportive wife and only the blessed ones will understand what I mean.

All joking aside, for me sound designing is a game of 98% the gut feeling and 2% slip-of-a-knob accidents. Sometimes I guess it is the other way around. Of course I stick to the obvious: experience, a deep dive into the instrument structure, synth possibilities browsing and the will to take the sound beyond what’s expected. Back in the day I just designed anything and everything. Like this huge will to shout out something you had always wanted to say–mainly inspirations drawn from artists I used to listen to as a kid. Of course it worked out, however one has to have their own signature at some point. Now I just analyze where to take the user, a direction no one has suggested so far. This is how the Digital Sins and Humanized sound packs for AAS Chromaphone 3 and Insomnia for the AAS Lounge Lizard EP-4 were inspired.

The sound quality, versatility, outstanding flexibility, the nature of acoustics unbelievable implementation, and the one-of-a-kind GUIs. I really appreciate AAS’ policy of designing the instruments that do their own individual and dedicated job. AAS Ultra Analog VA-3 is an analog synth whereas AAS Chromaphone 3 is an acoustic object synthesizer–loud and clear, you know what you get. Yet, the fact that you can design different genres within their architecture is a definite advantage and an invitation for a sound designer like myself to walk in and do the unexpected.

My two kids–a son Bartosz and a daughter Hanna–just moved out to live their lives. The empty nest syndrome lasted for about 12 minutes and now my wife Ewa and I are just getting a new lease on life. Besides, I also started running marathons, I guess the middle-age crisis has just kicked in.

Of course I would like to continue my music passion and also try my luck in the gaming industry or compose music for TV. I’m just building up my portfolio currently.

Additionally, my studio is getting some improvements and my new website is finally done. What else could you wish for? Well: love, good health and peace of mind in such strange times. 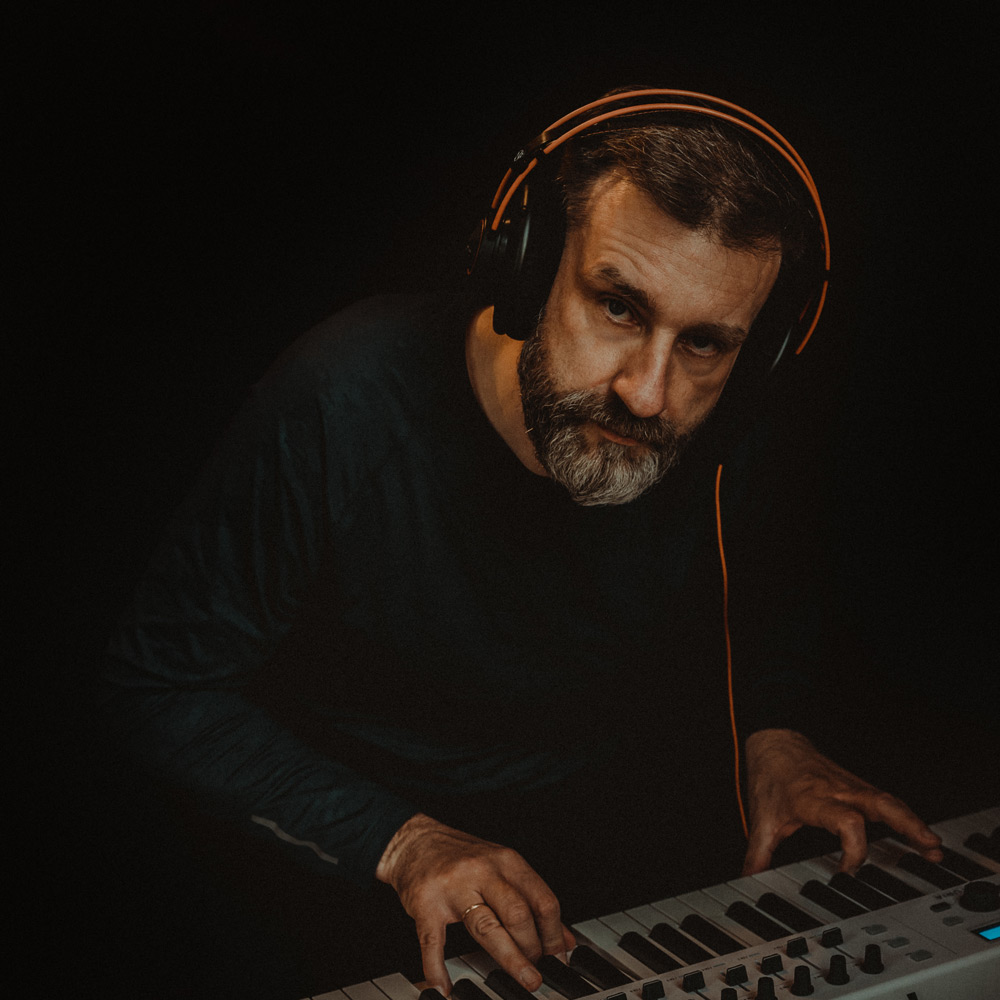 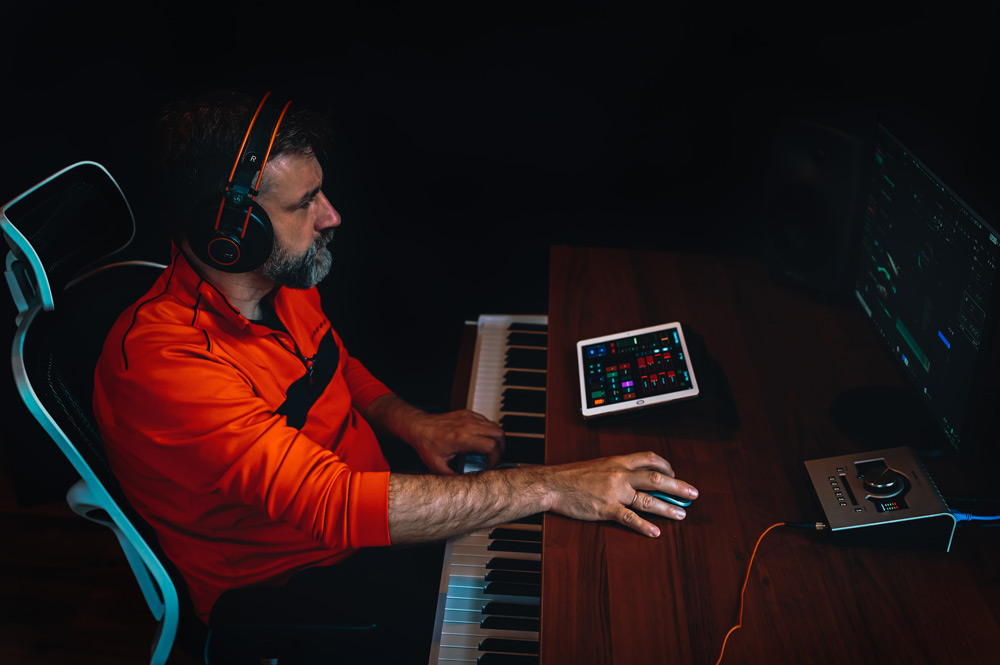