Entangled Species grants exclusive access to the beloved tools, inspirational encounters, and living sounds of composer David Kristian. This organic collection of arpeggiators, pads, loopers, synthesizers, keyboards, noises, and sound effects shall evolve as a natural extension of the sonic inventory of anyone into electro-acoustic, ambient, and film music arrangements.

"Over the past few years, String Studio VS has become a true go-to synth for all manner of unheard-of, yet seemingly organic sounds. From film scores to game sound design, String Studio VS is one of the few software instruments that tests the limits of what can actually be achieved with physical modeling."

"This set of 128 patches I have created and used in various projects is an experimentalist's labor of love, a homage to the great composers and sound designers who have inspired me, but most importantly, it is a collection of living sounds meant to augment, and in some cases replace traditional acoustic instrument in Electro-Acoustic, Ambient, and Film music arrangements."

"I encourage you to take the time to explore each sound's range, tuning, and response. It would also be a good idea to look at the preset notes I have included with most of these patches in order to get a feel for their origins and intended use, but don't hesitate to make them yours and tweak their DNA."

David Kristian is a music-maker, film score composer and sound designer who has been involved in audio for media since the early 1980s. For over a decade, David Kristian has been mostly making sound and music for games, but he is still active as a music-maker, who's latest release is Relevance and Serendipity, a classic Berlin School synthesizer in 2020. Always musically reinventing himself, his latest projects are focused on a blend between eerie nostalgia and auditory illusions.

Read our interview with David Kristian.

I think Entangled Species is stunning. David Kristian has managed to push the String Studio engine (and particularly the Bow excitator) in ways that I hadn't thought possible. There are some sounds in that bank that could have come straight from an Alfred Hitchcock film! Truly excellent work!

The 128 presets of Entangled Species 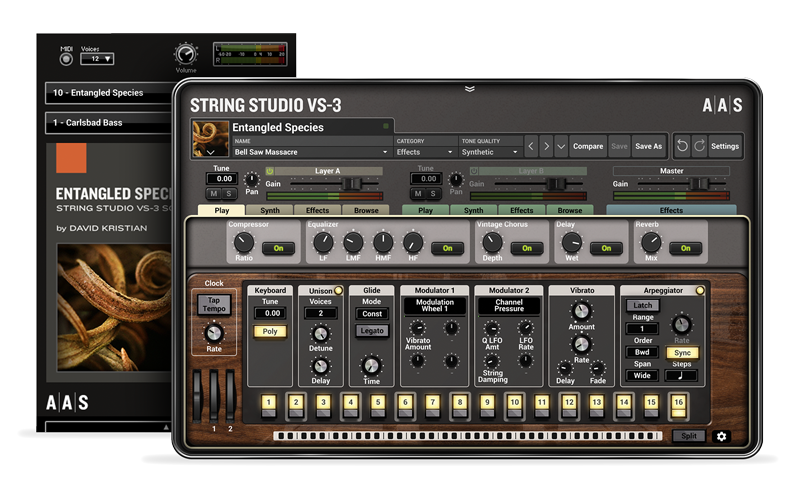