This preset collection can be used with the free AAS Player plug-in as well as the Lounge Lizard EP-4 electric piano.

After creating Insomnia—the first Lounge Lizard sound pack ever—Daniel Stawczyk has clearly not run out of ideas just yet. Once again, electric pianos fans are in for a treat with a plethora of exceptionally musical and eclectic sounds with a lot of character and peculiar textures. Caffeine brings you that familiar electric piano foundation you know and love while adding wackiness and originality for an unequivocal source of inspiration. Each preset was carefully crafted with clever use of Lounge Lizard’s powerful effect rack pushing the envelope a tad further. This collection of 105 presets will inspire you with outlandish keys, leads, and synths, growling organs, odd pads, effective splits, pulses, and sound effects. Caffeine is so addictive, it will most likely keep you up all night creating music.

Only compatible with Lounge Lizard EP-4 and the free AAS Player.

All the sounds you hear in the audio demos are all from this sound pack except the drums.

The 105 presets of Caffeine

Caffeine was created with the Lounge Lizard EP-4 electric piano. You can obviously play and edit the sounds in Lounge Lizard EP-4, but you can also access and play them via the free AAS Player included with your Caffeine purchase. 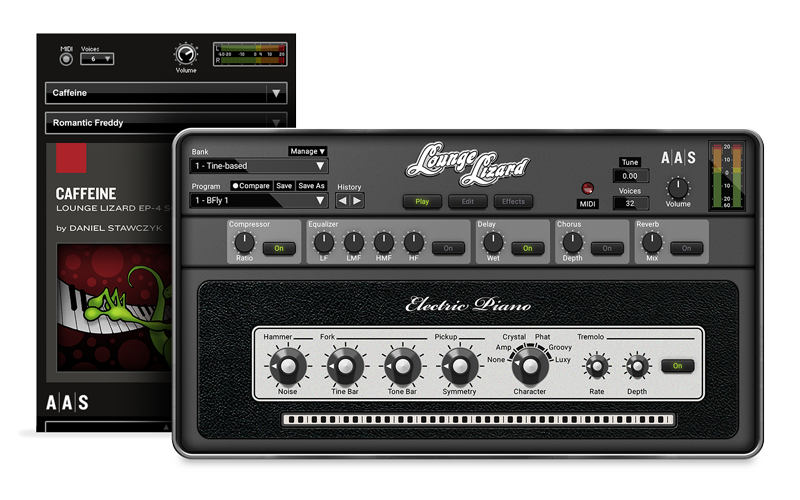 Lounge Lizard EP-4 and AAS Player are compatible with nearly all DAWs.

Presets played via the free AAS Player are not editable. This sound pack is not compatible with Lounge Lizard Session.