This preset collection can be used with the free AAS Player plug-in as well as the Chromaphone 2 acoustic object synthesizer.

Longtime AAS contributor Thiago Pinheiro delivers the highly versatile Multiverse, his first contribution to the Sound Bank Series. The 100-preset collection packs otherworldly textures, unusual melodic and percussive elements as well as a range of dynamically rich instruments that are particularly well suited for cinematic soundtracks and sound design. The synthesis expertise of acclaimed virtuoso and music technology pioneer Thiago Pinheiro is at your fingertips, with each patch overflowing with interactive possibilities and instantly useful combinations. From organic sounds to sci-fi scores, from abstract ambiances to cutting edge grooves, transitions and unique arpeggiators: surprise yourself with Multiverse’s full expression, responsiveness, and sonic depth.

Thiago Pinheiro was born and raised among Brazilian musicians of great importance and his talent was revealed at an early age and followed closely. Gifted with perfect pitch, he began composing on the piano at age four, and by the time he was twelve, Thiago had performed alongside major players such as Stevie Wonder, Billy Cobham, Gilberto Gil, and Hermeto Pascoal. Producer and director Thiago Pinheiro is an acclaimed virtuoso and audio technology pioneer, as well as a versatile pianist and keyboard player, whose work ranges all the way from blues and jazz, to house, drum and bass, and other electronic genres. Constantly striking dance floors across Brazil, Europe, Asia, and especially in the United States, Thiago also produces music for Hollywood and the movie industry.

The 100 presets of Multiverse

Multiverse was created with the Chromaphone 2 acoustic object synthesizer. You can obviously play and edit the sounds in Chromaphone 2, but you can also access and play them via the free AAS Player included with your Multiverse purchase. 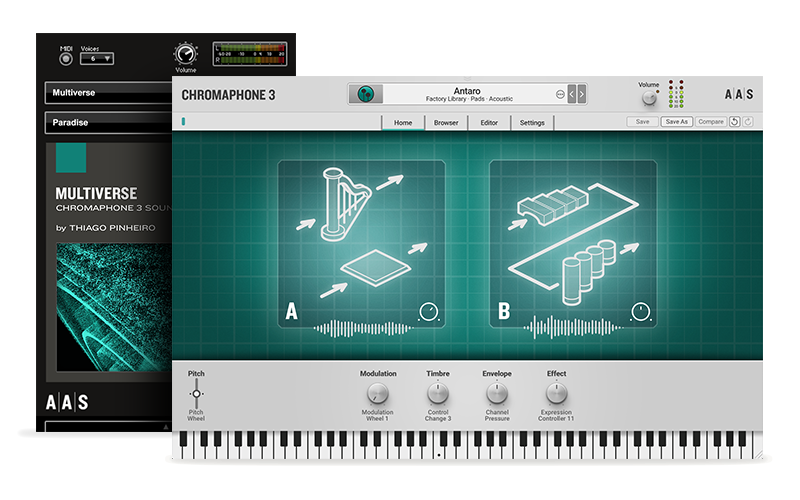 Chromaphone 2 and AAS Player are compatible with nearly all DAWs.