Brazil-born Amon Tobin spent his formative years in the UK. He came up through the breakdancing and hip-hop scenes of the 80s, and the drum & bass and jungle scenes of the 90s, before establishing a sound and a style that was singularly his own. He first emerged with a string of 12" singles on the small London label 9Bar Records, and his breakthrough first album, Adventures in Foam, led to his signing to Ninja Tune Records in 96.

For the next several years, he pushed the boundaries of sound to the limits on acclaimed albums such as Bricolage, Permutation, Supermodified, and Out From Out Where, and pushed other compositional tactics forward in albums like Foley Room and ISAM. He also produced several original movie and video game scores, such as the blockbuster game Splinter Cell: Chaos Theory. He also created numerous dancefloor-oriented singles and albums under the Two Fingers alias.

The depth and scope of Amon Tobin's work have been a major inspiration to many. He achieved respect among artists within and outside electronic music. He established a reputation for musical ingenuity unconfined by genre and still remains to this day, one of the most visionary electronic artists of his generation.

All the sounds you hear in the audio/video demos are all from this sound pack.

The 102 presets of Deconstruction

Deconstruction was created with the Chromaphone 3 acoustic object synthesizer. You can obviously play and edit the sounds in Chromaphone 3, but you can also access and play them via the free AAS Player included with your Deconstruction purchase. 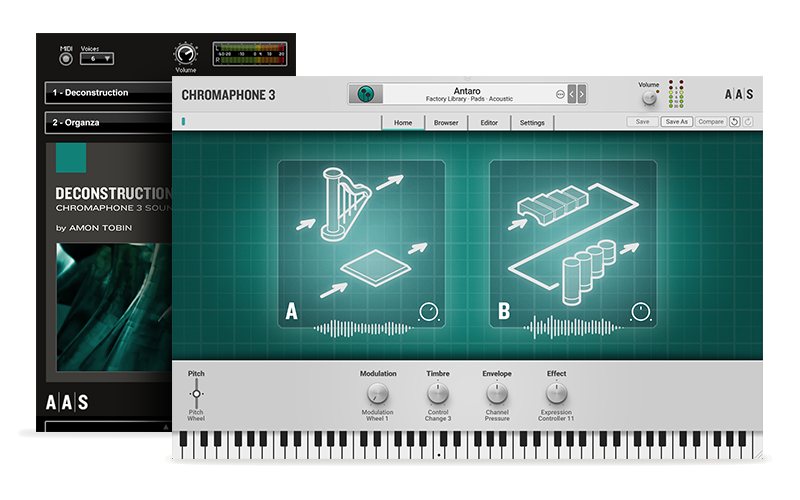