Following the release of rising hip hop star YONAS’ debut album The Proven Theory, Divine utilized the majority of 2011 and early 2012 in a Los Angeles post production studio. Furthering his skills in mixing, he spent time this Summer with Manny Marroquin, a 4 time Grammy winning engineer. Additionally, Sean self-produced and mixed all 12 tracks from The Proven Theory. The independently released album debuted in the iTunes Top 100 and video releases can regularly be seen in rotation on Fuse and MTV U.

After landing a publishing deal with So Star Entertainment/Peer Music UK (founded by former manager of R&B phenomenon, Akon), Divine honed his production, mixing, and tracking skills in some of the countries top recording studios such as Westlake, Record One, and Gold Sound Studios.

While still in college, Sean created a web page at Soundclick.com to potentially gain more exposure through his instrumentals and production work. To date, the page has received over 2 million hits and 20 million plays. With this exposure, he was able to develop an international following and respected instrumental catalog, providing innovative production and mixing for major and indie artists alike.

Be sure to visit Sean's website to find out about his latest projects!

A Few Words with Sean Divine

When did you decide to pursue music professionally?

I had always hoped that I could work with music full-time, for as long as I can remember. When I graduated high school, I wanted to move to the city, and find a studio gig as an engineer. Like most parents, mine did not take my musical ambitions seriously, at least in the beginning. They encouraged me to attend a university, in case my musical aspirations were short-lived. I continued to record and write music in my dorm room while completing my degree.

In 2006, I found out about a website called SoundClick that was providing a platform for up and coming artists, producers, and songwriters to build a catalog. I had a few instrumentals that I uploaded. I had no expectations, other than to share my tracks with friends and connect with other artists. My site grew slowly. After about a year or so, I was receiving calls from A&R's at major labels like Atlantic and Universal.

Eventually, I started getting actual offers for my music and I realized it was possible to get paid for doing what I love. I simply followed my passion and the rest took care of itself.

We noticed that you recently garnered over 20 million plays on your website, congratulations. What advice would you give other producers hoping to generate a similar level of exposure?

I truly appreciate the artists, songwriters, and listeners who have supported my work over the years. It has been inspiring to me to hear the positive responses. I can provide some guidance but ultimately they are responsible for the exposure I've experienced.

First, you should update your catalog frequently and maintain consistency. I can remember one summer, for a month, I had uploaded a new song or instrumental every day.

Second, always communicate with the artists who are working with your production. Stay active on relevant forums and social networks to listen to your audience. Find out what resonates with them the most. They may gravitate towards records you're not crazy about at first but don't be afraid to put something out there.

Finally and most importantly, find artists you believe in and invest your talents in their projects. One of the first breaks I remember involved two rap artists active on the SoundClick site, DZK and F.a.T. They had developed a dedicated following, particularly in the college scene. Back when I first found out about them, I reached out and sent them some beats. The songs they wrote for them ended up at #1 on the indie charts and they always had my producer credit listed. It really helps to have your production showcased with talented artists.

The experience you will gain from working one-on-one with artists gives you the ability to go beyond being a "beat maker" and you start realizing how to really produce a record. I have been lucky to be in the studio with different talent. In result, my compositions have evolved and it has made me a much more effective producer.

Who are some artists you would like to work with in the near future?

I want to work with anyone that inspires others in a positive way and makes strides to innovate. BT, Lights, Thom Powers, Mat Kearney, Reach Records, Big K.R.I.T., and M83 have been my major inspirations of recent.

I hope to become more involved in producing and mixing in all genres, particularly more rock records.

We are very happy and proud to count you amongst our users. What do you like about AAS instruments?

I have been using AAS instruments for a few years now. Strum Electric GS-1 is one of my go-to plug-ins. Some of my most popular productions use Strum and often people assume I had a session player come in for the guitar parts. For a traveling producer like myself, often on the laptop, it is an amazing option. I love the natural sound and the customization of even the smallest elements like finger/pick variation, amp sound, and pickup type.

Physical modeling always allows for interesting and unique results. The flexibility in the AAS plug-ins is amazing and I've never had to read the documentation. This is so important for me in making music because I never want to let the technical side become more important than the creative process.

I just recently have gotten into Chromaphone and I love the results I'm hearing. Being a drummer, it is such a fresh and new approach to programming drum and percussion sounds. I'm certain you'll be hearing AAS plug-ins in my production for years to come.

What part does sound design occupy in your composer/producer work?

I love to tweak and create sounds, although I do start with some presets in the creative process as well. Ultimately, I'm trying to achieve the sound in my head as quickly as possible so that I don't lose the vibe. If I don't have the sound already, I reach for my synthesizer or plug-in to program it. At that point, I'm looking for the quickest way to get to that sound. One of the easiest synths to program and get solid results with is your Ultra Analog VA-1 plug-in. It has a unique color and fits well in the mix. I use that particular plug-in often.

There will be days in the studio that I devote to sound design and manipulation only. I will program a variety of sounds. This allows me to keep my library fresh and to explore new sonic possibilities.

In your creative process, does the general structure of the song come first or do you let yourself be inspired by sounds?

It is a mixture of both. Sometimes I will wake up in the middle of the night with an idea for a hook melody or drum line. I will roll out of bed, turn on the keys, and make sure to get the idea recorded. In this case, I am guided solely by that idea and the sounds are put together later.

In other instances, I will open up a plug-in and browse through presets or be inspired by a sound I recently programmed. The sound can spark an entire song start to finish.

What are some important projects in your career you feel have helped you grow as a composer and producer?

My first production work was for the urban artist, YONAS' debut, The Proven Theory. That project was very special for a number of reasons. It taught me a lot about the approach to producing an album and the music industry in general.

When he sent me a demo of a record he had written to one of my tracks, I was impressed and knew we had to work together. This was in 2008, before him or I had ever worked on a complete and original album, start to finish. To hear a hip hop album with one producer today almost never happens, so that was an exciting feat for me. I learned how much time, energy, and people it takes to release a record properly. It goes so far beyond the studio.

Hip hop blog sites like DJ Booth embraced the records and that helped him create a dedicated following. He just appeared in an issue of XXL magazine last month. To see how far our efforts have reached and how far his career has come is amazing.

In 2011, I was working in a studio in Los Angeles as an assistant engineer. The owner and lead engineer was a great mentor to me and taught me a lot about mixing and running a studio. Up until then, my engineering chops were really lacking. I was able to become much more comfortable in stressful situations and in managing a room. In most cases, no owner is going to put you behind the board with high-level clients while you're still wet behind the ears. He did the opposite and had the confidence in me to let me run sessions. I was slow at first but it made me learn on the spot. That kind of pressure gave me confidence and is necessary for anyone to improve.

There are a plethora of music producers, how do you distinguish yourself and how do you plan to stay relevant in the future?

I've always been very diverse in my musical interests. I don't cater to one type of artist or even one genre. I'm constantly challenging myself to take on new approaches to creating music. For that reason, every record I work on is different than the last. That keeps things fresh for the artist, the listener, and myself. This industry is ever changing and you have to change with it or you won't be able to keep up.

We want to continue to provide resources to help artists achieve a higher level of exposure and distinction. The bigger vision is to build a label around all of my efforts and take on artist development.

I simply love music, I love how it makes me feel, and I embrace the power it has to influence others. As long as I can keep reaching people with my music, I'll keep pushing myself every day to be an innovator. 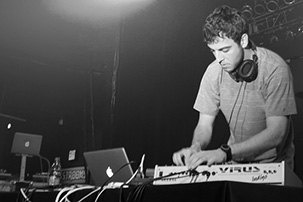