A few words with Richard

Could you tell us a bit about your musical background? How did you get started with electronic music?

I started taking piano lessons at around age 8. It was here that I was introduced to classical music, and learned to sight-read. I at first hated the piano lessons and had little interests in music. I had gone through various different teachers and it wasn't until my last one where I really started to take notice of some amazing music. I discovered the music of Eric Satie, Debussy, Haydn, and Chopin. The music was deeply complex, beautiful, and layered with the movements and changes throughout each piece that would sometimes play out for 20 minutes. I had never heard music like this before. Which at this time in my life was hugely influential.

What does your studio look like? What are your main tools?

I just recently finished building a new studio earlier this year. It took almost a year and a half to complete and I have made some serious upgrades from my older studio. I basically moved into a new room, which is about 2 times bigger than the spare bedroom I was in before. We built a state of the art new post-production mixing/editing room to adapt to all my sound design projects. It's centered around the Yamaha DM-2000VCM digital mixing console and an Argosy desk. This setup was designed so that I could just walk in and plug my MacBook Pro into the console via Thunderbolt through the Universal Audio Apollo Quad audio interface. I run most of my mixdowns with the UA plug-ins and this interface. Running the interface in conjunction with my digital board allows me to use some of my favorite hardware effects units like the Eventide H8000 and Eclipse. I also have a host of other outboard effects that I like to use when creating sound effects for clients. It's very clean and organized room compared to where I was in before. There is a lot of open space and I wanted to put the most emphasis on the mixing area.

Some of my favorite tools are a combination of hardware/software synthesizers and effects. I am a big user of Native Instruments software, particularly Reaktor and Absynth. I have done lots of patch design for them over the years. I also use the Kyma system by Symbolic Sound for a lot of custom sounds and using it as a unique controller to manipulate other sounds. I also love Cycling 74's Max/MSP and UI Software's MetaSynth 5. As for my DAW, I switch between Logic Pro, Nuendo, and Pro Tools. It really depends on the project or client I'm working with. I also have a wide collection of keyboards, circuit bent instruments, drum machines, and a rather large collection of modular synthesizers that I have been putting together over the last 6 years.

You are known for heavily processed sounds and dense textures. Could you tell us more about your usual workflow?

When working on my own compositions I will almost always start out with a collection of different sounds. It can come from many different sources. I do a lot of field recording for my sound design jobs. So I have collected thousands of hours worth of recordings, from various subjects, nature, machinery, atmospheres, unusual spaces, etc. Sometimes I will also record audio from software instruments that I have designed. Often I will record my modular and other synthesizers here at the studio while jamming for hours and then picking out the most interesting bits for a track. I then will take all the sounds and edit them into smaller sections that can be used more like audio Lego pieces that will somehow fit together into a larger context. I will shift around pieces to hear what is working. It's a bit like a puzzle that you assemble together and at the end, you will see this sonic picture that will tell a story.

You are known both as a sound designer and a producer. Are these two tasks very different for you or is sound design an integral part of your compositional work?

I would say they complement each other in most of my work. Almost all of my musical compositions contain elements of synthesis and acoustic sounds. I usually start out by making the ingredients first which involves designing the sounds for the piece. Then as I build up more structure to the piece I will design intros, builds, and transitions. Sometimes I will do this completely with sound design. Using elements that I have captured out in the field and mix them with synthetic processing to create these interesting hybrid timbres.

How would you describe your new Microsound Textures sound bank?

It's a collection of different sounds that aims to be more of a texture toolset to anyone that wants to add some interesting sounds to their work. I titled the bank of sounds Microsound Textures after reading Curtis Roads book Microsound. I was fascinated by the idea of using sound particles and creating a universe of sound out of only using one-tenth of a second of sound. Lots of the sounds follow the idea using grain particles and tiny pulses. The collection is divided up into five categories: Percussion, Sound Effects, Keys/Synths, Pads/Strings, and Textures/Ambience. In conjunction with the particle-based sounds, I've also included a wide variety of musically rich playable instruments. Some of them are delicate and light, and others are dark and atonal. I wanted these sounds to be a springboard for new ideas on how to use Chromaphone in more interesting ways. Hopefully, it will inspire users to create new sounds and music.

From a sound design point of view, how do you find working with Chromaphone?

I'm a huge fan of physical modeling technology and had been following Applied Acoustic Systems for a while. I have been a big fan of their instruments and use them for a lot of my work. I purchased Chromaphone after seeing it at the NAMM show. I was completely blown away by the simple elegant interface and quality of sounds it could produce. I find working with it to be very easy and it integrates so nicely within my musical and design projects. I often use Chromaphone to design interface design sounds for video games and hardware devices. I designed almost all the sounds of the Barnes & Noble Nook tablet last year using Chromaphone. The Nook startup and UI sounds where based around the plucked mallet models. This particular model works really well for cutting through ambient noise.

Harmonic Geometry is your second title in our Sound Bank Series. How would you describe it?

I would say it’s a sound collection that focuses on textural resonant sounds that at the same time are very musical and harmonic. I love the modeling technology in VS-2 and thought it would be really interesting exploring what other types of sounds its capable of other than a string like effects. So I created percussion sounds, dissonant ambient drones, gestural sound effects, and synthesizer based tones all with a focus on musicality.

In addition to Harmonic Geometry, you were involved in the design of the String Studio VS-2 factory library. How does this synth inspire you?

I have always been fascinated with any software environment that models strings and resonant bodies. I feel there is a real lack of this type of modeling technology within the virtual instrument world. So I was really excited to try out the new String Studio instrument. I was amazed at all the different kind of sounds you could get out of this plug-in right out of the box. Everything from realistic strings to otherworldly resonant textures is possible with this new instrument. It really made me think outside the box in terms of how to use this modeling technology to create entirely new sounds that have never been possible before. The String, Excitor, Filter and Body Soundboard modules really give you an incredible amount of control. I think this is the first time in history that I have had a string-modeling instrument with these many parameters to tweak; it’s really inspiring exploring everything that it can do.

I just finished releasing a record on MakeNoise Records a few months ago. It was the first in a series of releases that is based around using the MakeNoise Shared system modular synthesizer. Each artist was sent the same small system to compose his or her two pieces on. The release format was a 7” clear record. So the two pieces could only be around 4:20 in length. I recorded my two pieces in August of 2012. The main inspiration for these two pieces was derived from the early works of Morton Subotnick.. I can remember listening to Morton's “Until Spring” and “Wild Bull” records thinking how amazing the timbres and gestures where. I loved the unusual places these pieces took me. I loved the way everything sounded so organic and rich but at the same time synthesized. I also loved how these works almost told a story in that it conjured up so many interesting spaces and images in my mind.'

The “Creature” series is in a way paying homage to those works. Each piece took one month to record. I designed the patch to work more like a performance patch in which I could access all the most important parameters and controls. I didn't have a way to automate anything with the patch other than creating all the gestures with my hand and doing the changes on the fly. So I created several diagrams that I drew out on several sheets of paper that would outline the different parts of the songs. I then performed each part with a timer so that I had practiced each part to a specific amount of time. You can listen and download for free one of the pieces on my SoundCloud page.

I have been doing a lot of performing and recording lately with the modular synthesizers. I have built up a rather large system of Eurorack modules over the last 6 years. I find it to be an interesting playground of different technologies and ideas. I am currently working on a new album that will be a collection of different patches. You can listen to some of those experiments on my Vimeo channel. 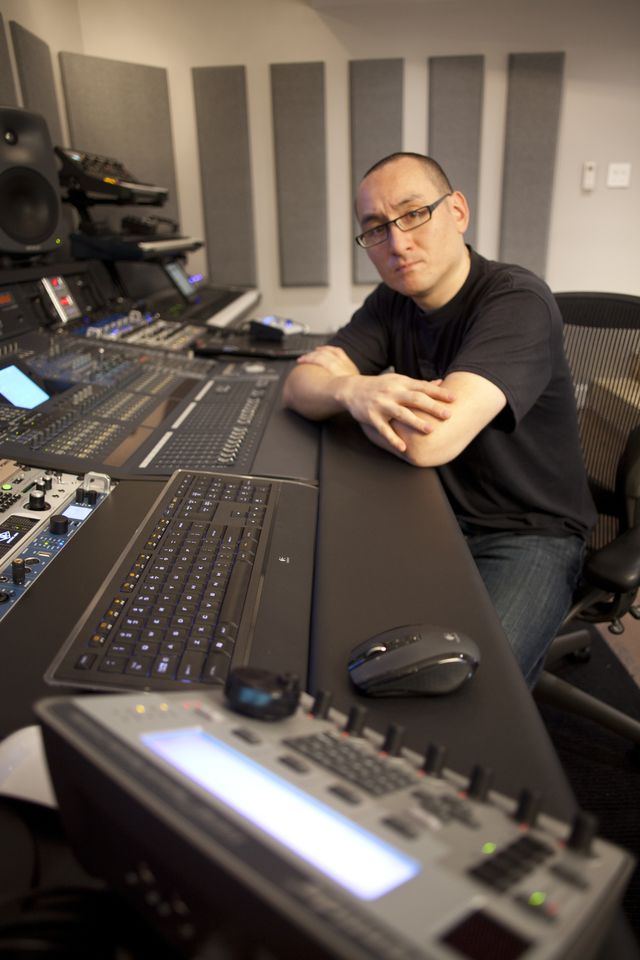 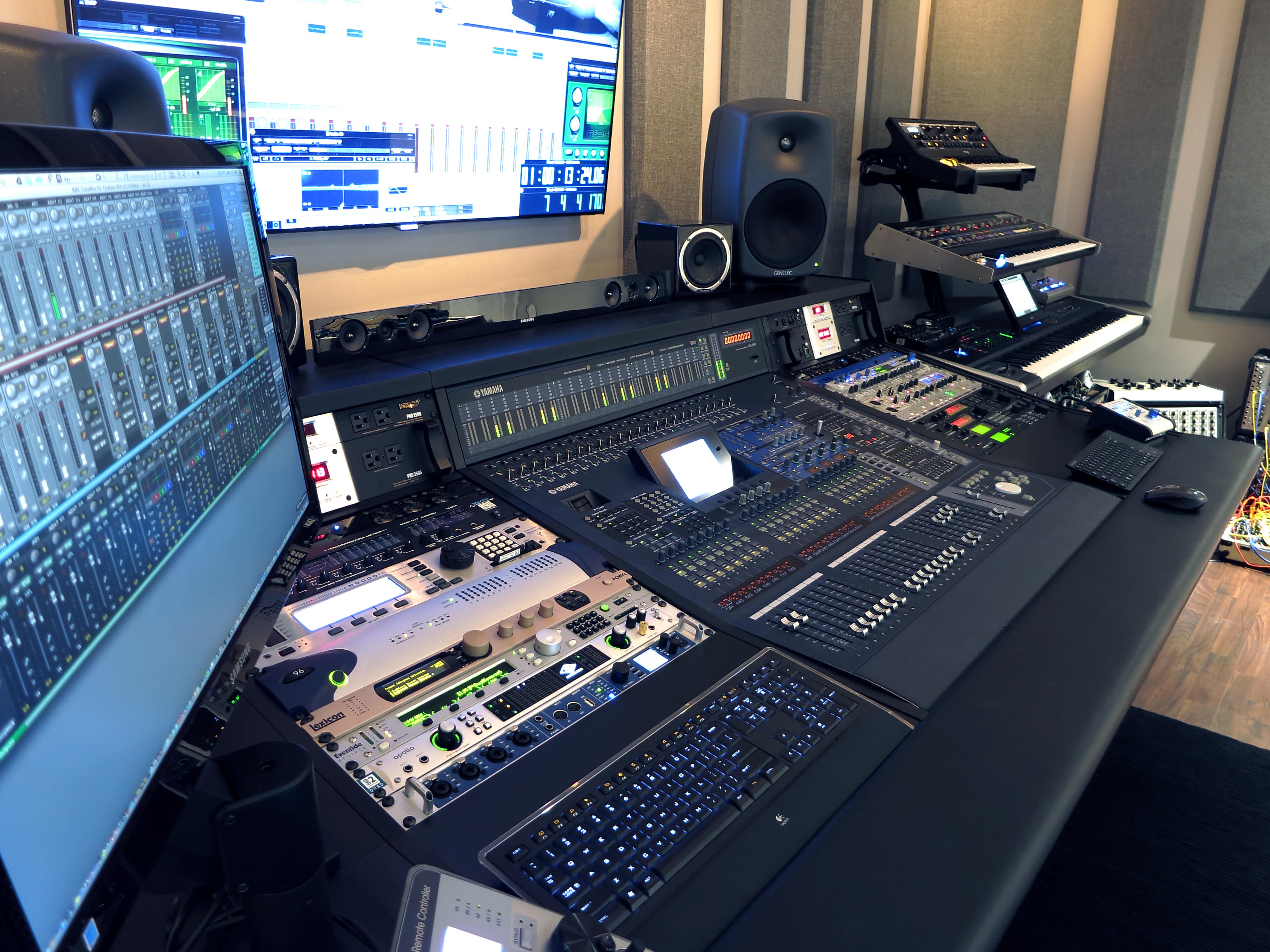 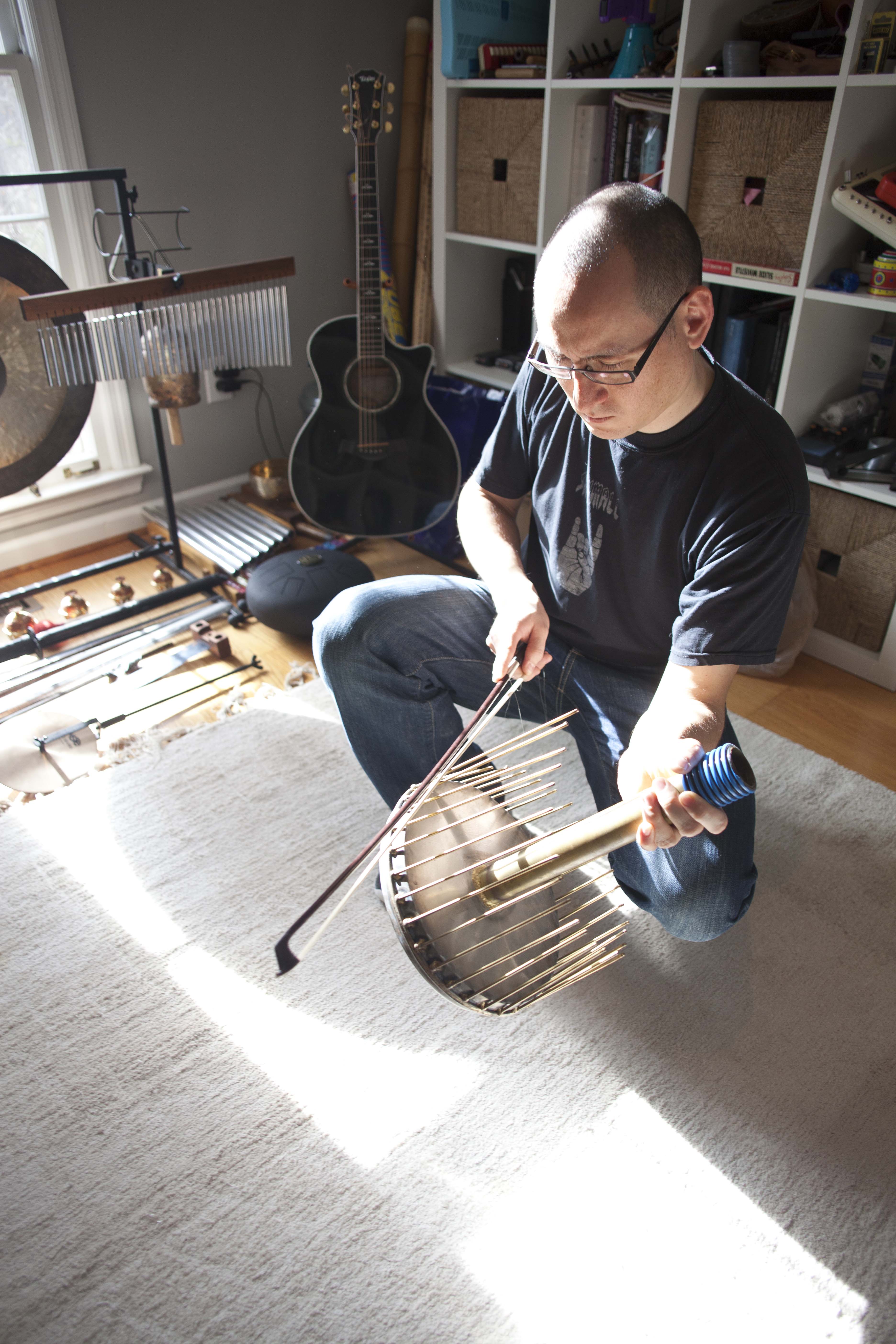 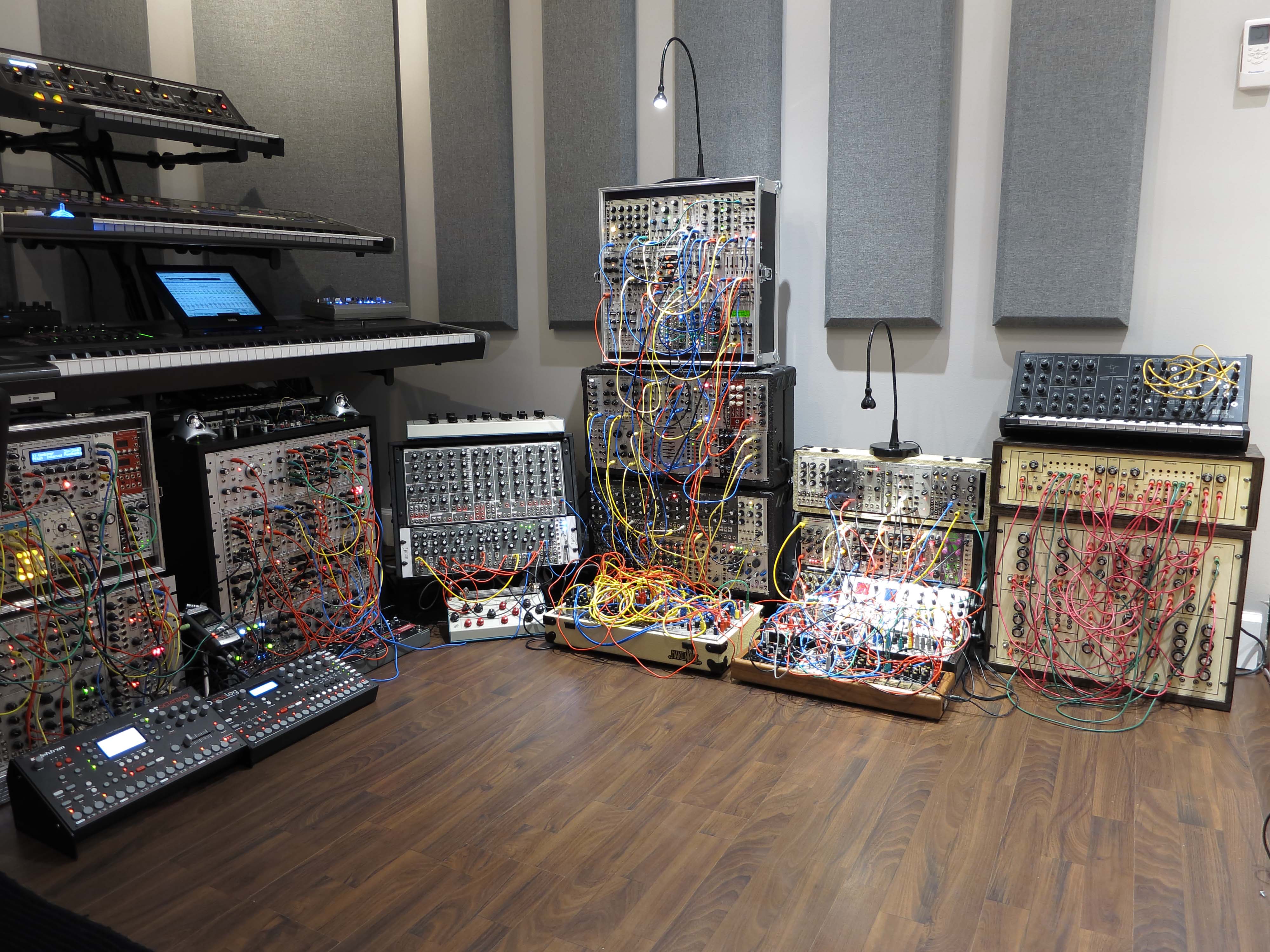