In the mid-1980s, composer and sound designer Gregory Simpson started Sardonic Sounds—one of the earliest 3rd-party synthesizer sound developers. For several years, Sardonic Sounds was a successful and respected provider of sound banks for many popular synths. But, by 1990, Simpson's own recording projects began to dominate his time, as did his association with cutting-edge software pioneers, Opcode Systems. That association turned into a decade-long obsession where, as Opcode’s Director of Product Design, Simpson and his team continually broke new ground in the areas of sequencing, audio recording, MIDI, plugin development, and user interface design. Simpson continued this trend when, in 2001, he co-founded Muse Research and conceived and designed Receptor, a hardware VST-player. Nowadays Simpson has come full-circle and returned to his roots—sound design.

A few words with Gregory Simpson

What made you choose String Studio as your first commercial sound design project in over 15 years?

You asked! Seriously. I didn't have a master plan that said, "in 2007 I will return to the world of commercial sound design." Obviously, my work with Muse Research kept me in-tune with all the synth and effects plugins on the market, and String Studio is one of the true standouts in this field. I bumped into Philippe Derogis at NAMM, and told him how much I loved String Studio. We talked a bit and, next thing I knew, I was programming a bank of new sounds for String Studio.

You used to be rather infamous for your uniquely named patches and the curious descriptions that accompanied them. How did this start?

Well, back in those days, programmable synths with patch memories were still relatively new. Even newer were synths that let you NAME the patches, and not just number them. So why, when they finally had the power to name patches, were companies so banal as to dub them Epiano 1, Epiano 2, Epiano 3, and so on? It drove me nuts. What made this sound a 1 and this other sound a 3? There was no consistency. Sometimes version 1 would be brighter than version 2. Sometimes version 2 would be brighter than version 1. Thus was born the Sardonic Sounds convention of redolent patch naming. Today, of course, most patches have poetically descriptive names, and I find the addition of a good patch description really helps musicians understand how best to play the patch. I mean, if you're a piano player and you sit down and play a Sitar patch like you're Vladimir Horowitz, it's going to sound awful. So, I always try to provide some quirky, silly, factual or sardonic suggestion on how best to play or use a sound.

Why did you get out of commercial sound design?

Several reasons. First, I always had a love of synthesis, but the industry was rapidly moving toward sampling. At the time, the sampling trend seemed like cheating to me. You didn't even design the sounds—you just recorded them, looped them, mapped them to the keyboard, then played back the recording by pushing the keys. Today, obviously, samplers are insanely powerful sound design tools, with a zillion parameters that enable you to twist and destroy any sample with gleeful abandon. But that wasn't the case back then. My earliest experiments with samplers were spent, mostly, trying to make them sound more alive or, at least, less like samplers. That's why I got into Digidesign's Turbosynth, which got me into the idea of using the computer as a way to make music, which sort of led me to Opcode Systems, which is where my all my attentions and energies became focused.

What drew you to String Studio?

Well, I mentioned Turbosynth. I'm not sure whether it was that or Sound Designer that included the Karplus-Strong plucked string algorithm, but I absolutely loved that algorithm. Computer synthesis wasn't anywhere close to realtime then, so you would have to program a sound, wait for it to be calculated, and then send it into your sampler so you could play it. I was always making new sounds with the Karplus-Strong algorithm and loading them into my sampler. When I first heard String Studio, it took me right back to the giddiness I felt with those early Digidesign products. Of course, String Studio is light years beyond Karplus-Strong, but I just love the sound of strings. Plucked strings. Hammered strings. Bowed strings. I love the sound they make when you torture them. I love their sweetness. I love their audacity. I love ancient stringed instruments, ethnic stringed instruments, and modern stringed instruments. I've always had a strong desire to own a hurdy-gurdy, but I live in a high-rise condo with neighbors who wouldn't take too kindly to all that late-night cranking and buzzing. If there were 30 hours in a day, I'd probably use the extra hours to become a cellist. So, yeah, I have a string thing. String Studio combines everything I love about the sound of a vibrating string with everything that I love about synthesis. It's an ideal hybrid, and a beautifully organic sounding synth.

Is there an underlying theme to Journeys?

Absolutely. The collection's tagline is "Sounds that evoke the essence of other times, places, spaces, or cultures." That's a pretty accurate description of what I tried to create with this library. There's a wealth of interesting and quirky instruments past and present that, even today, haven't tickled the ears of too many westerners. Many of these instruments are dripping with character and charisma, and a primary goal was to infuse this library with some of that non-western essence. It's the character and the quirks that, even still, makes me enjoy playing a physical model of a sound much more than playing a sample of it. The performer can interact with a physical model much like a performer interacts with his instrument. Samples tend to be static snapshots of a single articulation. As such, this library is definitely designed for musicians—people who are willing to experiment with a particular sound and actually learn how to play it. Perhaps, they'll be inspired to listen to real world recordings of the instruments, and use these recordings as "suggestions" for how they might approach a particular patch. Better music comes through learning and exploring. It comes from listening. If you're the type to just dial-up a sound, hit middle-C, and wait for something magical to happen, you'll completely miss the point of this library. It's about adding idiosyncratic, organic, forgotten, and imagined sounds to your productions

Now that you're back, will you be doing more sound design in the future?

What can I say? I'd forgotten how much fun this is... and how infuriating. I'd forgotten how immersive the experience is, and how it makes you start critically listening to every little sound around you. Many of the sounds in this library took several hours each to create, and I conducted a lot of research—listening to hundreds of different recordings in an effort to extract their sonic essence. Each time I nailed a sound, it was like a little victory. And this library is like 128 little awards. So, will I do it again? Never say never. 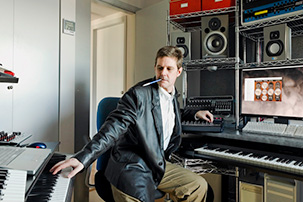 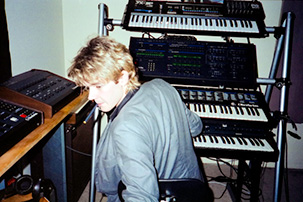