Simon Stockhausen was born on June 5th, 1967 near Cologne. At the age of five, he started his musical education (piano, saxophone, drums, synthesizer, composition), and it's at the age of 12 that he began performing in his father's works. After his final exams in 1986, he started touring the world with the Stockhausen Ensemble and also co-produced electronic music for two of his father's operas.

The successful collaboration with his brother Markus Stockhausen over the last 20 years in the field of jazz and improvised music generated numerous CD releases on various record labels (ECM, EMI, LARGO) and soundtracks for film and theatre productions. In 2005, they published their last album nonDUALITY.

Since the early 1990s, Simon has composed music for various german chamber ensembles. His first big orchestral work will take place in 2012.

Since 1998, he has also written and arranged music for many german theatres and composed the music-theatre Rheingold Feuerland which is partially based on motives and musical fragments from Richard Wagner's opera Rheingold.

Besides his compositional work, he has performed numerous concerts as a keyboard and soprano saxophone player in various groups – with the WDR Bigband in Lalo Schifrin's Esperanto (2000) and with the australian trumpet player James Morrison, with whom he founded the band On the Edge in 2003 and toured through Europe and Australia. He has also performed contemporary music with the Berlin Philharmonic Orchestra as well as with other european orchestras.

Since 2003, Simon has composed the filmscores for many documentaries and shorts, one of them being Trip to Asia. In 2008, he wrote the filmscore for Amos Gitai's fiction Disengagement, recomposing Gustav Mahlers' Das Lied von der Erde (The Song of the Earth).

In 2009, he started patchpool.de, his sound design website, where he publishes commercial and donationware patches for many software synthesizers, FX plug-ins, and samplers as well as soundfiles for post production and sound design.

A Few Words with Simon Stockhausen

How would you describe your Cardinals sound bank?

Cardinals reflects the diversity of my musical mind I would say, it has influences from all the sonic directions coexisting in my work and life. So there are beautiful and gentle sounds contrasted by dark and mysterious textures, they are expressively playable musical instruments and more abstract unchromatic/microtonal ones, there's shadow and there's light, there's animated nervousness and there's chilled out calmness. There are patches influenced by eastern and oriental musical cultures and there are sounds more associated to our western culture.

What caught your attention in Chromaphone?

I got Chromaphone the day it was released. Having owned the AAS collection since 2005 and my good old Korg Z1 since the late 1990s, I had lost interest in physical modeling sounds for a while, but when I demoed Chromaphone and heard the crystal clear beauty of it, I was sold in a second. I dived into it right away, experienced its expressiveness as a keyboard player and created some hype about it on KVR as I think that everybody should at least demo this exceptional piece of software.

How do you approach a sound design task? Do you start with a precise idea in mind or do you let yourself be inspired by tweaking?

That totally depends on the instrument I create sounds for. With my sound sets for Alchemy, I had recently begun to focus on certain instruments or specific material for new projects, e.g. multisampling all sorts of metallic materials as well as chemistry and metallurgy instruments, or abusing an acoustic western guitar for Warped Strings. After doing two large banks for Alchemy comprising everything I had in mind at the time, I felt the need to go that route. Of course every project has its own dynamics – processing samples with Metasynth to compliment the acoustic aspect of certain sounds sometimes takes you to the sonic outskirts of reality and beyond, and you visit places you didn't know even existed. So loosing control of things sometimes can be very inspiring. With Cardinals, being my second Chromaphone project, I wanted to take it to the next level. Now that I totally know the instrument, there were more things to experiment with, and I found many sound combinations I hadn't tried in my first bank.

Your electronic music involves sounds from synthesizers and field recordings. Are these two approaches complementary for you?

Yes, totally. I've been running around with field recorders and shotgun mics for decades now, collecting environmental sounds as every sound surrounding us is musical in some sense, especially when processed and taken out of context. When mixing electronic textures with those found sonic objects, or deriving electronic textures from these environmental sounds, I always feel like Alice in Wonderland, it's a never-ending fascination to detect a cool rhythmical structure in a bombastic factory sound for instance, or understand the code of a singing bird after transposing it down eight octaves or time-stretching it so that one can actually hear all the notes it sings.

You are a very prolific electronic music composer and sound designer. Do you consider sound design as a part of your compositional work?

I don't make a distinction between the two. Composing sounds and creating playable instruments or ambient textures for other composers and musicians to use is as demanding and creative as writing a score. Like I said above, every sound can be considered as being musical, and the frontier between sound/noise and music has always fascinated me. Sometimes creating a single patch can take many hours and when it's ready it feels like an artwork in itself.

Reading your bio, it seems that synthesizers were part of your formal musical training from very early on. Did your first compositions include synthesizers? How important was this influence in your development as a composer?

I did my first compositions when I was 5 and 6 years old. After learning to read and write notes, my father naturally urged me to start composing, and I liked it. So I sat in front of the piano and with my quirky childish writing started to write stuff for piano and the instruments played by all my siblings. Soon it got very atonal and dissonant, and I asked my father if there were no sharper and more dissonant intervals available than the ones I found. It's at 9 that I got my first synthesizer, a Minimoog which one of my sisters, a pianist, didn't want. And bang! That's where it all began. Soon I had explored all the possible settings on the Moog and got more synths, a 4-track tape machine, guitar amps, mics, and what have you. But at the same time, I continued with my piano lessons playing Beethoven and Schubert, learned to play the saxophone and drums, so both the acoustic and electronic worlds were always present. This coexistence of both worlds still exists today, mixing acoustic instruments or field recordings with electronic and synthetic textures is what keeps fascinating me.

Most impressively, there seems to be no boundary in your musical life. You are a performer and a composer, and you work across genres touching contemporary music, jazz, ambient, orchestral, electronic, film scores, and more. What is still challenging for you musically?

This diversity is probably part of my nature. Having grown up in a more avant-garde and classical musical environment determined by my dad, I started to get into funk, rock, jazz, fusion and ambient music around the age of 9 as the atonal and more experimental music only touched one side of me. At the same time, I listened to Stravinsky and Beethoven, and played classical piano works as well as checking out John Coltrane albums, trying to play along on my alto sax.

I really got in touch with improvised music and jazz when I was about 14-15 years old through collaborations with my brother, who's a great composer and trumpet player (jazz and classical). We later formed the trio Aparis and toured the world for many years, releasing several albums on ECM and other labels.

Then later in my life, I played the sampler in several contemporary orchestral pieces and had encounters with big bands and great jazz players like James Morrison, Peter Erskine, Vince Mendoza, and Lalo Shifrin just to name a few.

I then arranged classical music for films and theatre, and composed a music theatre last year based on Wagner's Rheingold. All these influences, genres, and styles have accumulated inside me and now I'm sitting more or less happily between all chairs as we say here. I had to accept that I can not categorize myself and my music as there are so many categories to choose from. My passion for Jazz has diminished a bit lately and I'm more into minimal ambient beat stuff, which shows through my sound design work and on my latest albums: Minimal Nightmare and Ambient Flight Vol. 1.

The challenge never stops, now that I have the chance to finally write for big orchestra a totally new challenge starts...

You are currently working on a big orchestral work. Can you tell us more about it?

Being an artist in residence with a big german orchestra I have the opportunity to do several things within the next season. One of the projects is my first big orchestral work in which I will combine orchestral music with live electronics and sampler. I will process the orchestral sounds with various plug-ins to add a quadrophonic virtual orchestra to contrast the acoustic sounds and also add a sampler playing pre-produced electronic textures and field recordings.

It will be harmonic/tonal music without the serialistic nerdness I have displayed so many times in my former contemporary chamber music compositions. Actually I'm trying to re-invent myself to a certain extent avoiding certain aspects of contemporary music which don't work for me anymore and which have put me off listening to contemporary music in the last decade. I'm looking for an epic atmosphere with a long breath, and I won't fear to also create beautiful and touching music. Let's see if I succeed or if I will fail better as Samuel Beckett said... 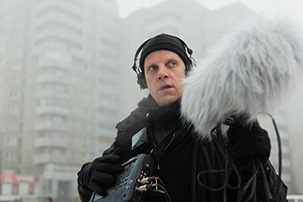