By the time he became a professional musician and sound designer in the 1980s, Martin Walker had already been an electronic engineer in radar and then hi-fi, a training manager for Atari, and a software author with a handful of well-received computer games to his credit.

His next seven years were spent on game soundtrack and sound effect commissions, completing over 100 projects across nine computer game formats. By the mid-1990s he had also started contributing heavily to music technology magazines such as Sound On Sound and Audio Technology, writing columns, reviews and features.

A Few Words with Martin Walker

How would you describe your KitNetix sound bank? Can you tell us how it took shape?

KitNetix features drum kits made from exotic materials, percussion unleashed from reality, soundscapes from dark beginnings to glittering futures, and fantasy hybrid instruments that have never been heard before. When I first heard Chromaphone’s factory library I was particularly taken with the contents of the Kit collection, where several AAS developers had very cleverly modeled a single instrument that morphed between kick, snare and hi-hat across a few octaves. I was determined to push this aspect as far as I could, and set up an elaborate test rig with drumpads and sequencers so I could quickly audition Chromaphone drum riffs in dozens of different styles across eight octaves of notes at wildly different velocity settings. Even while perfecting this new approach I was surprised by some of the exotic combinations I achieved—there really was a huge amount of sonic movement across the keyboard.

What did you find inspiring in Chromaphone?

The seamless nature of its sounds, which can be so delicate yet hugely expressive, and the joy of exploring a significantly new soundworld. For me, a particularly attractive feature was the noise module, whose density setting could be reduced in activity from almost continuous (ideal for creating bowed instruments) down to the occasional semi-random click. This lower range let me mimic natural sounds such as bubbling water and crackling fires, which in turn inspired a whole new range of ‘generative’ sounds from gentle minimalism to slowly evolving soundscapes, and from mood-setting atmospheres that convey a wonderful feeling of emptiness to instruments played by inhuman hands. Kinetic energy is the energy of such motion, so I had my bank title—KitNetix!

Some parameters of a synthesizer based on physical modelling, for example our Coupling parameter in Chromaphone, are different from traditional synthesis parameters. Is this a hurdle or a source of inspiration for you?

A source of total inspiration! I first started designing sounds with analogue synthesisers way back in the 1970s, so I'm always grateful for new and exciting approaches to sound creation, especially when they are at least slightly open ended. Physically modeled instruments from some other companies have in the past had all their ‘rough corners sanded off’ to avoid unexpected nasty noises creeping in, but what I like about AAS models is that you can really push them to extremes and come up with unexpected new sounds in the process. You have to be careful if you push the model into unpredictable territory and it locks up in a squeal of feedback, to avoid damage to your loudspeakers, headphones and most importantly your ears, but the extra scope for sound creation is well worth that slight risk.

What are the initial steps when you begin sound design work on a new synthesizer?

Twiddling all the knobs to see what happens, and exploring whatever presets have already been created, basically to see how they can be pushed further or made even more expressive. Because the developers are so close to the product they may stick with conservative settings that they know will work well, whereas I may push parameters way further than originally intended and come up with sounds that might surprise them.

How do you usually start designing a sound for a synthesizer?

I tend to use one of two completely opposite approaches. Sometimes I’ll get an idea for a novel way to create a new sound starting with unusual settings for several controls, so I’ll assemble something from scratch and see if this theory translates well into practice. However, more often than not I’ll start with an existing preset and start twiddling knobs almost at random to push it in a different direction. My sounds all take on a life of their own, ending up totally different from the initial inspiration, so I don’t consider this ‘cheating’ in any way, but more like radical circuit-bending!

How different it is to design for a purely synthesis engine as of starting from other source, like field recordings for instance?

For me it’s all about the initial level of detail. I love the way field recordings are invariably crammed with tiny detail—you can take even a tiny segment and time-stretch it or transpose its pitch by a huge margin and discover yet more creative possibilities. However, you do have to be careful that the end result remains playable in a musical context—some libraries contain far too many detail-filled ‘one-note-wonder’ presets that dominate a track.

With a classic analogue synthesis engine you often end up starting with a comparatively bland waveform, then adding more depth and movement using multiple oscillators, followed by further detail and expression using filters, amplifiers and effects. Physical modeling sits somewhere in the middle of these two extremes, as you can achieve complex sounds far more quickly than with most analogue synthesis, although the results can often be far less predictable, which can be a help or a hindrance depending on how you like to work.

Does the fact that our synthesizers are based on physical modeling change your approach to sound design?

Not really. Each and every synth has at its heart an engine, and the art is to learn how many different ways there are to drive each new engine using the provided controls. For me, sound design is rather like meditation; you just try to let go, let things happen, and let each sound have its own journey. As each control is tweaked you follow whatever comes up, back up if you take a wrong turn, and hope you eventually arrive at an interesting destination.

Is playability always in the back of your mind, or the uniqueness of a sound can take over? In other words, when do you know that a sound is a keeper?

I usually know when a sound is a keeper when it inspires me enough to starting improvising. Following my previous ‘sound design as a journey’ analogy, a few sounds may end up in a cul-de-sac, but thankfully most develop individual strengths or traits that you can polish until they shine. However, the beauty of physical modeling is that even slight tweaks to a couple of control settings can catapult you in a different direction—a case of less is more!

Can you tell us about your musical projects?

Well in the early days I was in bands playing prog rock and then jazz rock, but when I started composing computer game soundtracks the commissions might be anything from thrash metal to music for a string quartet, so I got a good grounding across many genres. Writing original music was always the most rewarding, although I took on a lot of projects converting existing tracks to other formats, which could be a huge challenge when the only source material was a dodgily recorded compact cassette or a one-inch high pile of manuscript paper with margin notes in Japanese. I also loved working with the C64 SID chip, although the most fun part was watching client’s jaws drop when I demoed my orchestral soundtracks for the Gameboy!

More recently I’ve been writing and releasing a series of ambient music albums on my Yew Tree Magic label, and find them a real balancing act between intricate layers of complexity and the space between the notes. They have been described in reviews as ‘a breath of fresh air’ and ‘like a slowly turning musical kaleidoscope,’ and many people have told me my music takes them somewhere different at each listen, as they follow one or another of its various melodic or rhythmic strands. All music should be a journey, and mine hopefully leads somewhere peaceful yet a little mysterious. 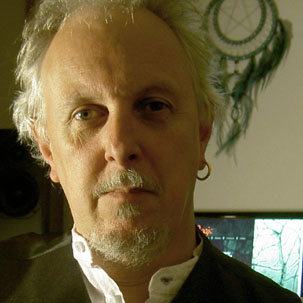 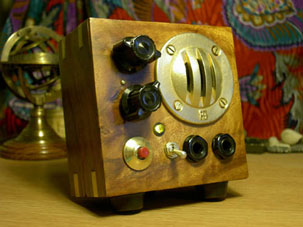 When real-world sounds beckon, Martin designs his own hardware.